The Museum of Old and New Art (MONA), in Hobart, Tasmania, has a new wing. It's called Pharos and was designed by Melbourne-based architect Nonda Katsalidis. 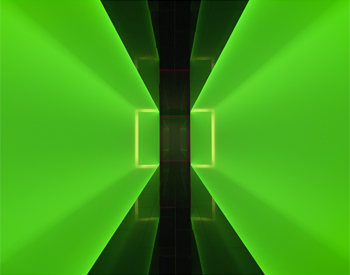 Besides Myself (2017) by artist James Turrell

After a world tour, Richard Wilson's work 20:50 (1987), which was acquired from London's Saatchi Gallery in 2015, has landed at MONA. 20:50 is an installation consisting of two steel triangles in a small room filled to waist-height with recycled engine oil. It's tempting to touch, it looks like black glass (but it is not) and there is a faint but distinctive smell of oil. It's an optical illusion, magical and beautiful. Only two people are permitted into the room at a time – and it is worth the wait.

However, it is James Turrell's work that takes the prize for the best optical experience. Besides Myself (2017) is a breathtaking tunnel of light that guides you into Pharos. The light is enchanting, optical and continuous.

You need to book for The Perceptual Cell and you need to sign many waivers before you enter. This is an intense experience.

Grotto (2017) by Randy Polumbo looks like a chill-out room at a club and it is the ultimate room to take a selfie!

Pharos cost $32 millions, $8 million of which on acquisitions.

Once you have absorbed the new artworks, lunch is a must and a perfect way to spend a late afternoon at MONA.