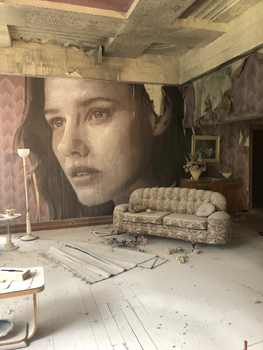 I recently travelled to the Dandenong Ranges (about 50km from Melbourne) and was fortunate to see the art installation Empire by Rone at Burnham Beeches.

Located on Sherbrooke Road, Burnham Beeches is an Art Deco Streamline-Moderne 1930s mansion completed in 1933. It was designed by architect Harry Norris to be the home of Aspro brand magnate Alfred Nicholas. The mansion was last occupied in 1991.

In 2010 Melbourne restaurateur Shannon Bennett and investor Adam Garrisson purchased the property to be redeveloped into a luxury hotel. Eight years later Bennett approached artist Rone, aka Tyrone Wright, to transform the mansion into an art installation whilst it awaited development.

Rone has completed a number of projects whereby he goes into a building about to be demolished and transforms the interior into a stylised recollection of what it was. The Omega Project is another recent example. 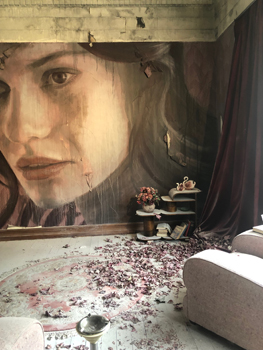 Rone paints directly onto the walls, Jane Doe images, and styles the interior to create a memory of the space. He photographs the interior, which in time will become obsolete, encouraging viewers to purchase a memory of the recreated space. The home/warehouse is then opened to the public to view before it is scheduled to be demolished.

To date Burnham Beeches would have to be Rone's most ambitious work – it took a year to complete with the help of many other creatives.

These projects are so desirable as they are not permanent. They pop up for a short amount of time then disappear just to become another impression.